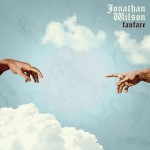 The shortest distance between two points is a straight line and Jonathan Wilson likes to go the long way round. Take the second track, ‘Dear Friend’. It begins with a waltz theme, only to break into a guitar-led melody. The waltz theme returns and then the guitar melody follows again. This transforms into a long guitar-led section with three parts, a band-based jam, a middle section with guitar and drums, and then a band jam again. Finally, the guitar melody kicks back in and the track ends. That’s a whole lot of distance to cover. But there’s no great rush. It takes over seven wonderful minutes from start to finish. The great trick with Jonathan Wilson’s songs is that even though they’re usually very long, they never dwell in one place for any great length of time. It’s like the weather in Ireland. The twists and turns are essential to the whole experience. The other great pleasure in any Jonathan Wilson record is the spot-the-influence game. Isn’t that a Pink Floyd guitar sound on ‘Lovestrong’? Surely that’s an Allman Brothers slide guitar on ‘Moses Pain’? Doesn’t ‘Illumination’ sound more than a little like Neil Young’s ‘Dangerbird’? That guitar phrasing on ‘Her Hair Is Growing Long’, isn’t it straight from David Crosby’s If Only I Could Remember My Name? It probably is and, what’s more, it’s probably Crosby himself playing it. In contrast to a whole host of Laurel Canyon imitators, Jonathan Wilson’s address book contains the home numbers of a more than a few of the originals. Here, it’s not just David Crosby who contributes in person, but Graham Nash, Jackson Browne, and Roy Harper too. And that’s not to mention the representatives of a more recent generation of performers, including Josh Tillman. In the presence of such stellar company, the great achievement is that it still sounds like a Jonathan Wilson album. Sure, there are plenty of influences, borrowings, liftings even, but ’twas ever thus in music, writing, art generally. So, play the spot-the-influence game with a contented smile and enjoy the journey from here to there and back again via all the places in between.