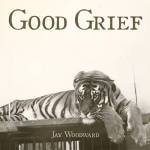 The press release for the second album by Jay Woodward makes it sound thoroughly dispiriting. A “dismal gut wrenching ode”. A “contemplative stream of consciousness that shrouds the most unpredictable stage of the living…death”. Heavy stuff. And the clip of Winston Churchill delivering a wartime speech at the end of track 2 doesn’t bode too well either. But this is no self-pitying, navel-gazing, morosity-provoking glum fest. There’s a lovely chamber pop quality to much of the songs, and Prime Minister Woodward himself has a voice with the potential to buck you up and raise your spirits. What’s also nice is that over the course of a very quick 31 minutes there’s plenty of variety. A couple of instrumentals. Some heavy industrial sounds, particularly at the start. A few lightly strummed folky numbers. And, perhaps the highlight, a little pocket symphony in ‘The Joker or The Fool’. Starting with a ‘Subterranean Homesick Blues’-style energy, we’re treated to some wonderful wordplay, “… do I exist at all inside a realm of omnipresent multiplicity, where I make every decision but choose one category …”, only for the song suddenly to metamorphosize into a thing of stillness and calm. There are some serious themes on Jay Woodward’s sophomore release, but they’re not designed to drag you down and pull you under. It might not be exactly life affirming, but it’s highly rewarding. And that’s a good start.