Lucinda Williams – The Ghosts of Highway 20 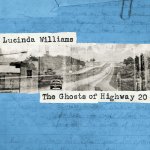 Lucinda Williams seems to be in a good place. She’s just set up a record label, giving her control over her musical affairs. She’s backed by a fine band, Buick 6, providing stability and real chops. She’s also on a great creative run. Her new album, The Ghosts of Highway 20, which clocks in at 14 songs and 87 minutes, comes hot on the heels of last year’s 20-song, 104-minute collection Down Where The Spirit Meets The Bone. Of course, these things are relative. To say that Lucinda Williams is in a good place is like suggesting that Lear is content with his lot. Because it almost goes without saying that The Ghosts of Highway 20 is full of the pain of the past, angst about the future, and a general discomfort with the present that marks out any Lucinda Williams album. And therein lies the greatness. The opening track, ‘Dust’, like ‘Compassion’ from the previous album, features lyrics from one of her father’s poems. Putting poetry to music is always tricky, but this is a real triumph. And it’s repeated on the magnificent ‘House of Earth’, which puts Woody Guthrie’s words to music. But there are many personal moments too. The title track is a trip down a two-lane blacktop memory highway. “I know this road like the back of my hand”, she sings, where “Every exit leaves a little death”. But even if the spirit on this album is the same as on its predecessor, this offering is a slower, more sombre, very deliberate affair. At no point do we hear the almost Crazy Horse-like riffs of ‘Protection’ or ‘Burning Bridges’ from last year’s outing, even though the songs were all written and recorded at around the same time. Instead, there’s a sense that the new-found musical freedom has given her the space within which to express herself more completely. One thing’s for sure, though. Even if The Ghosts of Highway 20 may continue to speak to Lucinda Williams, they also have plenty to say to us too.