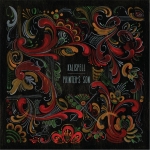 Printer’s Son is the great new album by Kalispell, which is the brainchild of Shane Leonard, who is a member of Field Report, which is headed by Chris Porterfield, who used to be in DeYarmond Edison, which included Bon Iver, who often has track titles such as ‘Bracket, WI’, which is the same sort of title as ‘Gary, IN’, which can be found on Printer’s Son, which is the great new album by Kalispell, which is the brainchild of Shane Leonard, and so it goes on. There is indeed a lovely circularity to Shane Leonard’s wonderful new album. The instruments breathe life gently into the songs, which reveal their secrets slowly and organically, before coming to a gentle, but satisfying end. And then the instruments start up again. In the liner notes we’re told that Printer’s Son “eschews the stomp-clap boom-chuck trends of indie-folk”. Sure enough, at times percussion is almost verboten. Instead, over gentle banjos, woody acoustic guitars, and earthy bass, the melodies weave their way into your sub-consciousness. Highlights include ‘Beautiful Doll’ with its female vocal accompaniment, and the aforementioned ‘Gary, IN’, where the musical palette is just a little bit broader. There are similarities between Printer’s Son and Field Report’s most recent release, Marigolden. Both comprise songs with a wide-open sense of space that’s filled with beautiful melodies and personal lyrics. Marigolden was a highlight of 2014. Printer’s Son will surely figure likewise in 2016.